My dad's fire station holds a breakfast with Santa every December. We'll hopefully make it to the mall later this month to see the real Santa, but this guy did a pretty good job in the meantime! 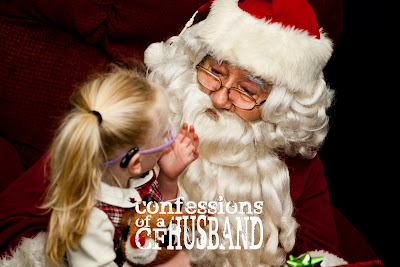 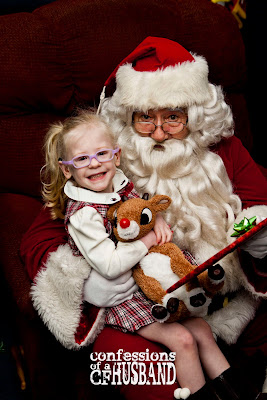 And, just in case you're wondering, Gwyneth has no reservations about the jolly old elf. But, as much as she enjoys Santa, she's absolutely obsessed (with no real prompting from us) with Baby Jesus...we have several nativity sets around the house right now, and she loves to play with them and carry Jesus everywhere with her. She also LOVES Rudolph (and any reindeer for that matter)!

Nate
Posted by CFHusband at 9:14 PM

This has to be one of the cutest pictures of a child with Santa I have ever seen. Her expression and his are priceless!

So hard to imagine her as a micro-premie now. She's simply amazing. What a blessing to see her sweet little face.

Thanks for sharing! You are such a good photographer and your subjects aren't too shabby either.

Wow! What a beautiful pic of Gwyneth with Santa! It was so gorgeous that I had to blow it up to see if it was a picture or a beautiful painting!

I haven't commented in a while, but, wow! Gwyneth is gorgeous! And so grown up. Happy Holidays to you and yours!

She is amazing! Love to watch your little miracle growing up. Give her hugs form all of her fans.
Rachel in TN
mommy to 3 sweet girls and another girl on the way