Thank you all for your prayers! Tricia woke up Friday morning feeling a whole lot better. She finally had enough energy to get out of the house on her own. Her appetite also seems to have returned. The past two days have been more of the same, so we're hopeful that she's past the worst of it.

We are coming up on three weeks of Tricia being sick. She has not been sick for more than a few days since she was declared in remission from cancer. I refuse to worry, but it is frustrating, especially for Tricia.

Although she was discharged from the hospital last Wednesday, she was discharged with the diagnosis of RSV and (walking) pneumonia. Since coming home, she has no energy and has only left the house once and has spent almost all of her time in bed or on the couch enjoying time with our kids. She began complaining of having trouble breathing after coming home, and she has been sleeping most nights with a nasal cannula for O2. She has almost no appetite and has lost quite a bit of weight. She has had a fever off and on about every other day.

Her doctors are concerned for her, and we are scheduled to return to Duke next week unless they decide she needs to come earlier.

She is very frustrated and a little scared. It's difficult for somebody who has been through what she has been through and then to live life so well for the past few years to get sick like this again. It brings back a lot of bad memories and fears for her. And, CFers are notorious for their ability to know when something in their body (especially their lungs) is not working correctly even before the doctors can detect it.

We honestly expect that this will pass, but it is frustrating in the meantime. RSV and pneumonia are two things that take a long time to recover from for those with lung disease and a suppressed immune system. There are some very high risks that come with RSV and pneumonia, including greater lung infection and a specific type of lung rejection that is caused by RSV. Basically, Tricia is in a place where it could easily get better, or could easily get much worse.

I would appreciate your sincere prayers for Tricia.

Posted by CFHusband at 8:55 AM 5 comments

Questions about the Book

I'm fielding questions and suggestions about the CFHusband book on Facebook. Would love to get your input! Click Here!

Nate
Posted by CFHusband at 8:37 AM 0 comments

Here are a few photos I took from my phone of the magazine article. We found it in Walmart today, earlier than expected! 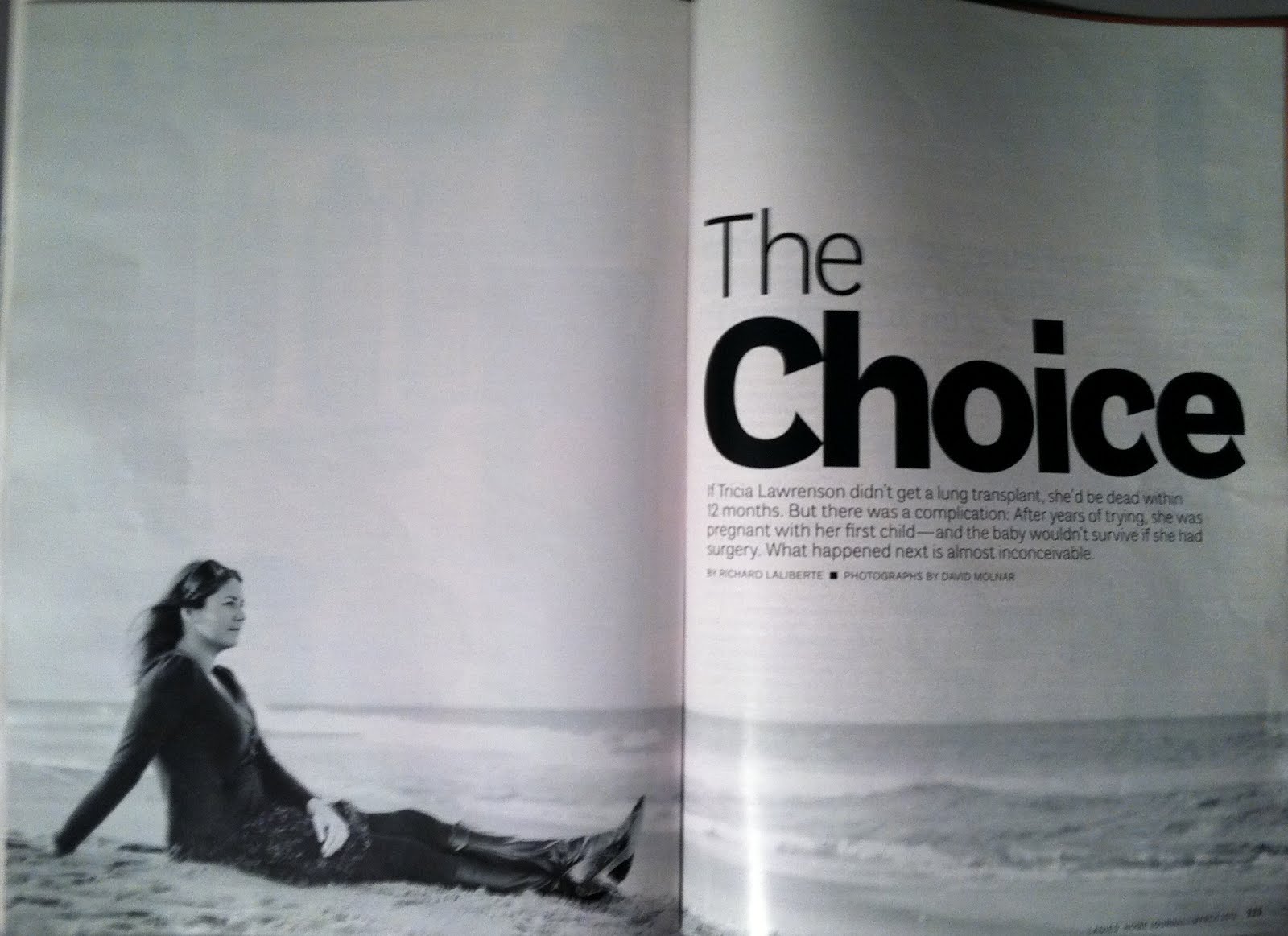 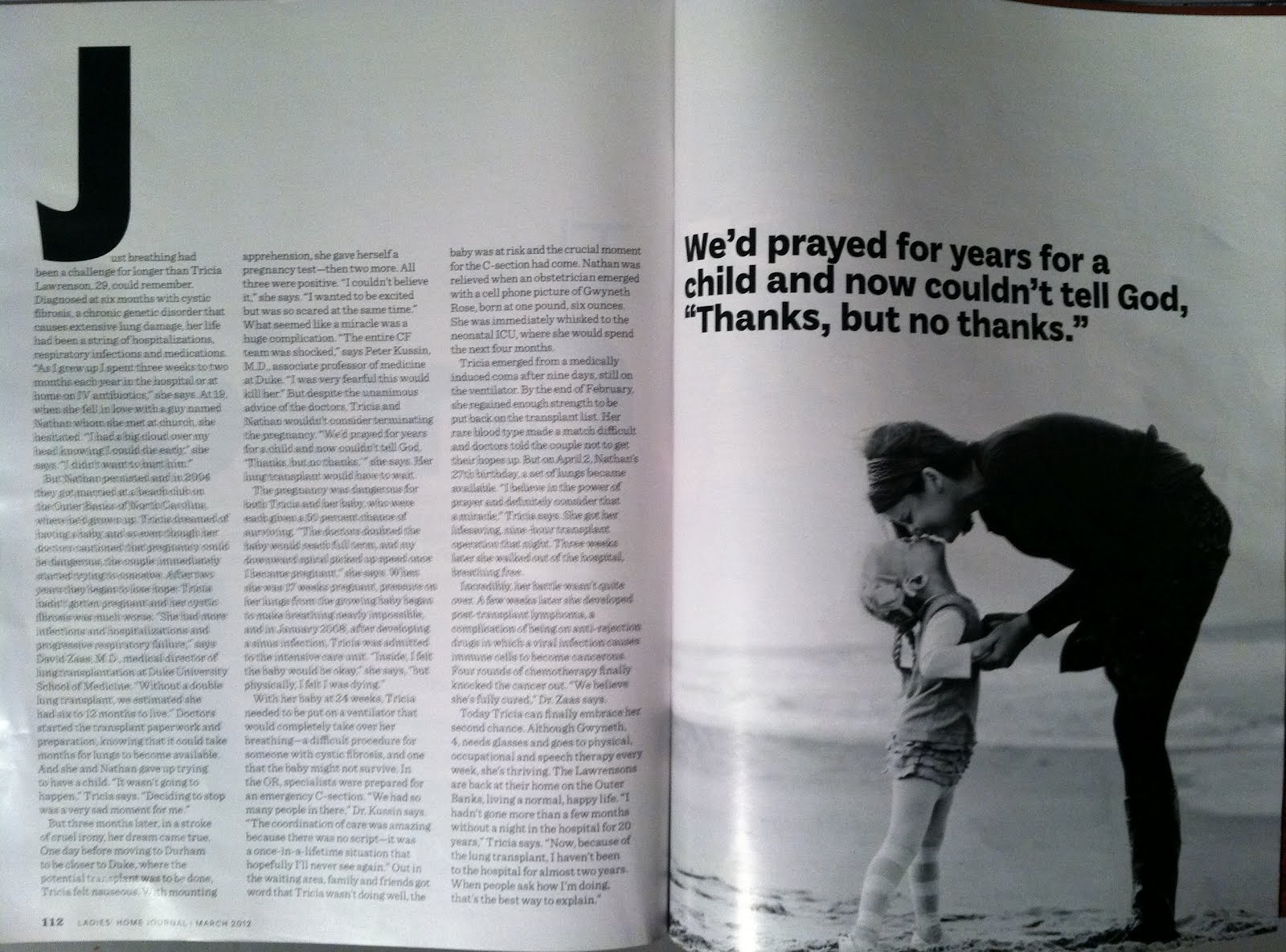 After over a year of waiting, the article about our story is finally being publish in Ladies' Home Journal. You can pick up your copy in stores next week, or read the article online Here! 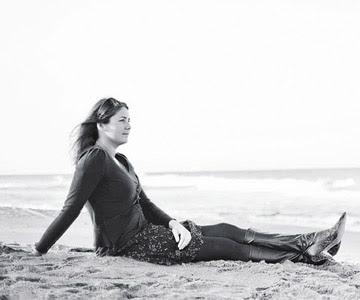 We'd like to thank our friends, David and Tammy Molnar for the photos that appear in the article!

Tricia is coming home from the hospital today! We have missed her! She is feeling much better. Thanks for your prayers!

Nate
Posted by CFHusband at 9:27 AM 8 comments

I officially began writing the book yesterday, although I have been considering the thought for a few years. I've had way too many people encourage me to do so to completely ignore the idea, and it is a project that has definitely intrigued me.

Our story has been well documented and publicized thanks to the power of the internet. Thanks to a handful of friends and family using mostly word of mouth, emails and blog comments our story went “viral”. As of today, the blog has received over thirteen million (13,000,000) unique hits, including one single day that surpassed 100,000 hits.

I have been encouraged by many people, family and friends and total strangers to write a book about our story. If I’m going to take the time to put a book together, I want to produce something that people, from the avid CFHusband blog reader to the person who has never even heard of Cystic Fibrosis would consider purchasing and reading…and sharing with others. Which means, a book about our story should offer something, if not many things, that can not be experienced by reading the blog. Which, brings me to answering that question, “Why a book?”

Let’s face it, if the only thing I were to do with this book was to copy and paste my blog, I wouldn’t even bother to read the book myself for grammatical errors…I certainly wouldn’t expect anybody else to want to purchase a copy when they could read it for free online.

What I am really excited about with this book is that I have had over four years to process the events that took place in 2007 and 2008. I now have a new and different perspective on those events and have been able to filter our story through what has taken place since. If you wish, you can think of this book as a revised, second edition of the blog.

I've created This Facebook Page as a way to keep myself accountable to consistently work on this project. I'll be posting updates there concerning my progress, as well as some information about the book as that information is available.
Posted by CFHusband at 11:00 PM 7 comments

Tricia is in the hospital.

On Tuesday she was diagnosed with RSV after a trip to our local ER. She had a fever and other symptoms. RSV is a common virus that is not dangerous for most adults. But, with her low immune system and weak lungs, Tricia is at a much higher risk for more severe problems. RSV could cause lung damage and has been known to bring on rejection, both of which could be deadly for Tricia.

We arrived at Duke yesterday and she began her treatment last night. She is placed in a "tent" for 6 hours while she is sleeping and given an inhaled medication, every night for five nights. She is on contact isolation, which means she is not allowed out of her room, and visitors must wear masks and gloves and gowns. She should be discharged on Wednesday if everything goes well.

I am driving home today to get back to Gwyneth and our foster child and work. Tricia will be lonely and is frustrated to be in the hospital after being so healthy for so long. I know it would make her smile to receive an ecard from anybody who would like to encourage her. If you would like to send her an ecard, go to This Link and type "Patricia Lawrenson" for her Name and "N/A" for her Room Number.