Seriously...how old were you when you figured out how to eat and surf your smart phone at the same time? 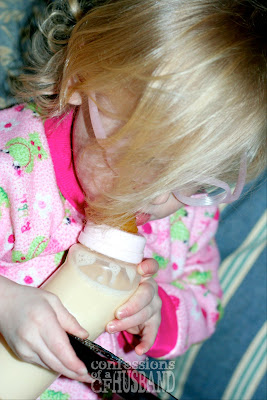 To be honest, we were very disappointed with our visit to Duke this week. Neither CHKD or Duke has been able to get a clear idea of Gwyneth's hearing loss. Tests have shown differing results, and Gwyneth has developed a fear of the animatronics in the sound booths (she's literally not scared of anything but animatronic animals), so the only way we're going to get that clear picture is to do another Auditory Brainstem Response (ABR).

Because of the lack of reliable data, the audiologist had no choice but to set her hearing aids to a "conservative" setting, basically meaning, they're set at a low volume so that her ears won't be damaged (had they been set too "high"). We already know that she has severe hearing loss in her right ear, so we can assume that her right hearing aid is not going to help her much at this point. We also know that she has very little hearing loss in her left ear, so we're also assuming that her left hearing aid is not helping much.

Regardless, it is great to finally have the hearing aids and be able to get Gwyneth used to wearing them. As you can see in the post below, Tricia chose pink for the "behind the ear" to match her glasses. The custom ear molds are sparkly (not sure how or why).

Gwyneth was/is not happy about letting us place them in her ears, but once they're in, she doesn't seem to mind. She hasn't shown much reaction to wearing them, and it doesn't appear that they have made any difference with her ability to hear. We understand that it may take a while for her brain to readjust to hearing new sounds, but again, we're fairly certain that they're really not doing much for her either way at this point.

We're hoping to have the ABR and the readjustment of her settings scheduled sometime in the next few weeks, and that, at that point, we'll really begin seeing a difference and some progress. In the meantime, we'll help her become acustom to wearing them.

Here's a video shot a few minutes after she was fitted for the first time...not much to see except for extreme Gwyneth cuteness.

Nate
Posted by CFHusband at 8:00 AM 27 comments

Pink and sparkly ear accessories, to be exact. 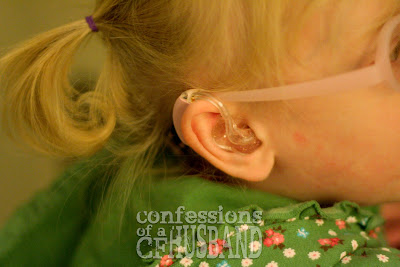 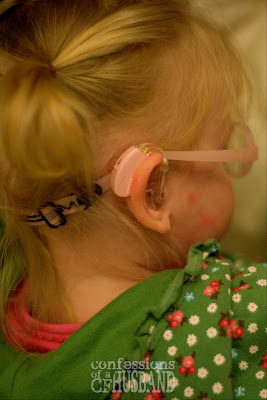 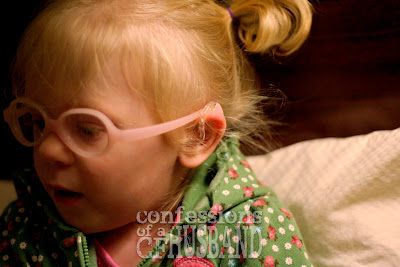 Gwyneth was fitted for hearing aids about a month ago, and they've finally arrived at Duke. We're headed there right now! We have high hopes that they will make a difference for her.

Since we're already there, Tricia has schedule an appointment with her TX team...she's had some sinus pain, ear pain, and a dry cough for a few weeks.

Nate
Posted by CFHusband at 7:30 AM 13 comments

Do You Know What Time It Is?

Gwyneth loves water...the pool and the bathtub especially. The video below shows what has become our nightly ritual...nothing gets her more excited...
Posted by CFHusband at 7:37 PM 51 comments

I haven't been posting because there's not much I want to put on the top of the blog other than the reminder to pray for Eva. Thanks for continuing to pray for her.

We went to the beach today to enjoy the warm weather. Always some treasures to be found on the beach in the middle of winter. 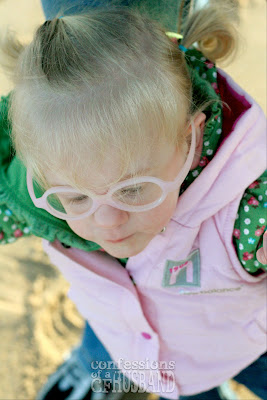 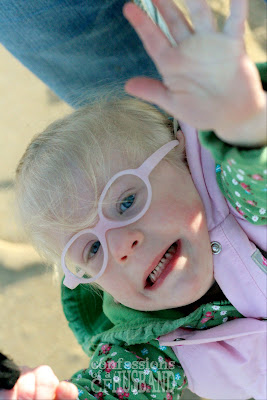 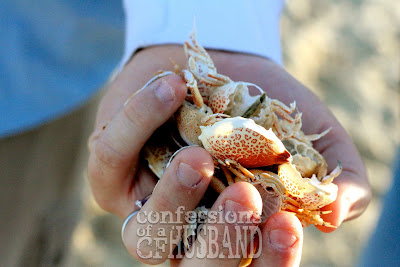 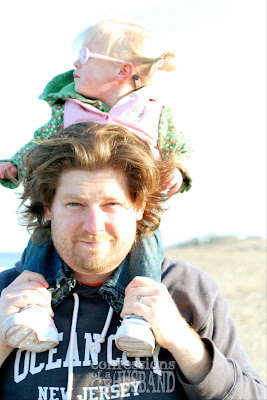 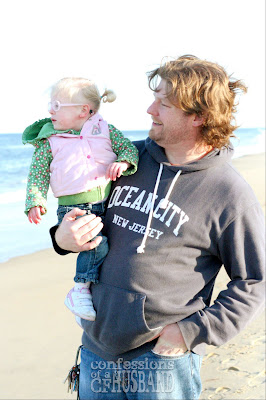 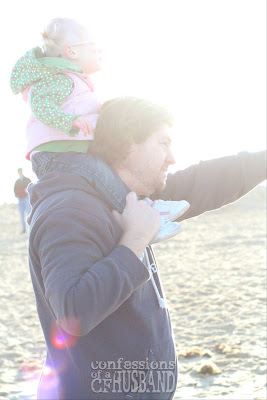 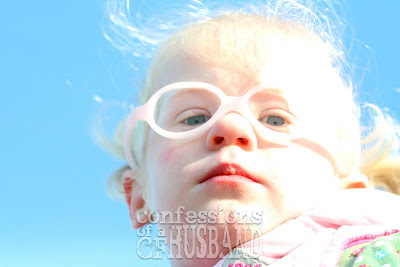 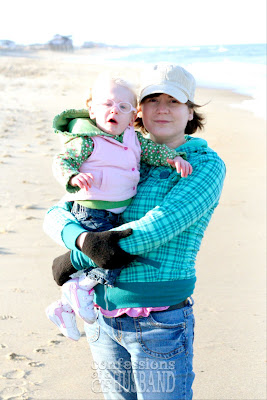 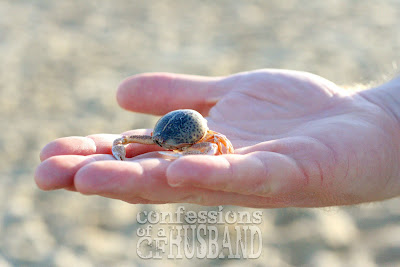 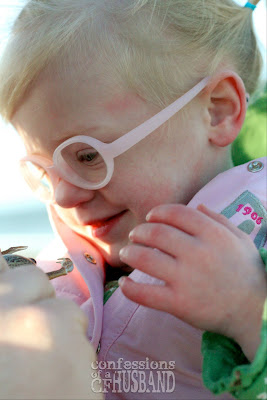 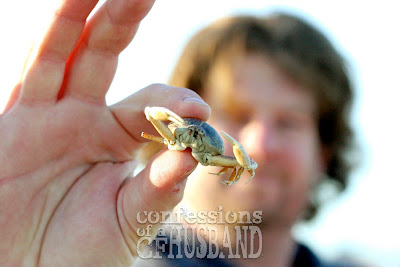 Please, Please, Please. With tears in my eyes, I ask you to pray for my friend Eva Markvoort today. Just a warning that the following video is very real and has some very serious content. 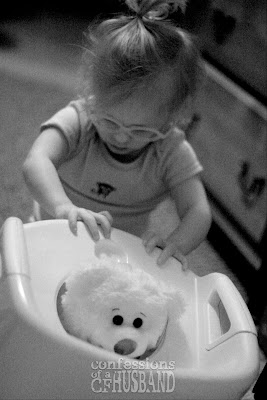 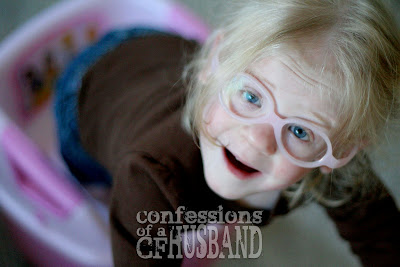 ...Gwyneth isn't quite sure what to do yet with her new potty... 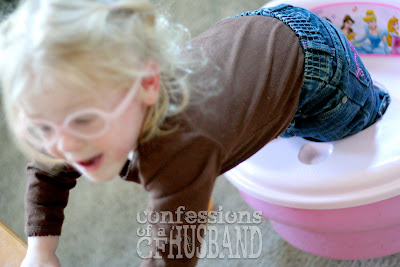 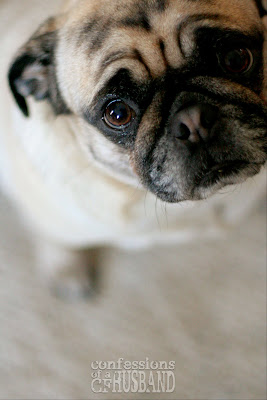 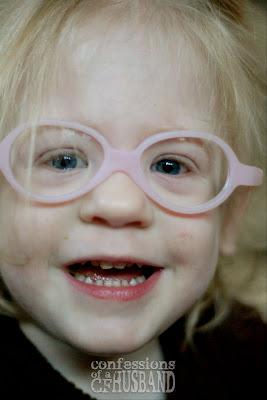 Tricia and I met Emily two summers ago...she and her family are from CA and vacation on the OBX for a few weeks each summer. Emily, like Tricia, is in her late 20's and living with CF. This past summer, we were able to spend several hours with Emily and her family, making life-long friends.

Now, Emily needs our encouragement and prayer. She's in the ICU at her local hospital with more than one infection, and she's not doing well. We would greatly appreciate if you'd pray for Emily today. 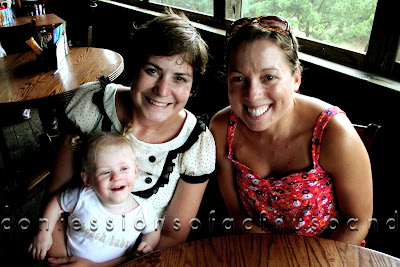 Nate
Posted by CFHusband at 8:20 AM 15 comments

Gwyneth and I were both feeling pretty nasty yesterday morning...Tricia woke me up by bringing Gwyneth into bed with me, where we both fell back asleep... Gwyneth rarely likes to snuggle much, so I enjoyed my hour of sleep with her rolling all over my head while Tricia snuck a few photos of us. 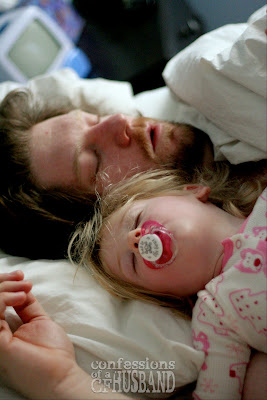 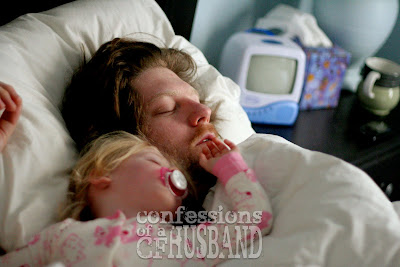 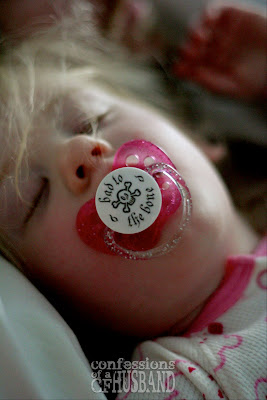 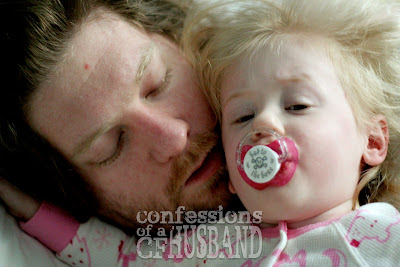 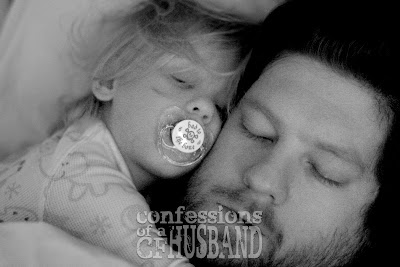