For All My Philly Family 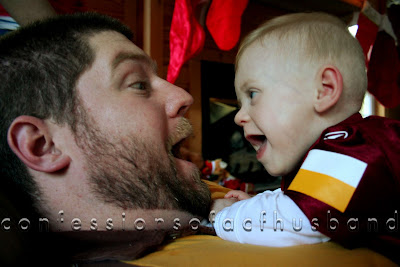 Nate
Posted by CFHusband at 3:00 PM

Such a cutie - love seeing that laugh and smile!

you guys really are warping her mind...the REDSKIN!?! sender her to me...I'll teacher her about real football teams! Go Steelers!

Awesome photo. Gwyneth is really getting big!!
Happy Holiday's to you and your family!!

Adorable!!!! Merry Christmas to you, Tricia and Gwyneth.

You all have way too much fun! I love it.

I am crying because the Vikings really stink!
What a cute picture!

I can not wait to see the comments you receive on this one! Haaaaaaaaaaa!

Could be worse - could live in Lions territory. Need I say anything else?

Don't go hating on the Eagles. They need all the love they can get this season.

That, or a good swift kick you know where.

This is an adorable shot! (You know you are setting her up to rebel as a teenager and love the Cowboys...) haha

Do you know why Texas Stadium has a hole in the roof?

So God can watch his team.

You are VERY lucky that child of yours is so freaking cute!!!!!!

She is getting so big!! My husband was glad that Philly lost, now his Cowboys "might" have a chance next weekend to make it to the playoffs!!

My husband is Philly born-and-raised, and he lives (and usually dies) by the Eagles. I've noticed that in years of late we are much more of a hockey family. GO FLYERS!!! (I may have been raised in MA all my life, but I root for the Flyers over the Bruins. Really, it's in our marriage contract!)

Very cute pic, by the way!

You are so lucky she is so darn cute even in Redskin colors. Eagles don't stink they come through year after after and disappoint their fans. BUT...we bleed green we love our EAGLES!!!! Happy Holidays! Enjoy your blessed miracle, she truly is stunning!

That is so NOT funny (says the sad Eagles fan). Wasn't Tricia raised with green blood in her veins? Tricia, it's time to exert your influence, here! :) lol

A Philly fan...but I still love the picture! GORGEOUS smile!

Totally awesome pic... even though we are, dare I say it, Ravens fans here in MD!! oh well... as for the comment about Texas Stadium... it had a hole in it this week so God could watch the Ravens beat the Cowboys -- sorry!! :(
Erinn in MD

Hey hey hey now! So our team stinks...like for the past 4 years but we've gotta stay loyal!! I'll let the comment slide and continue to love your blog though because you've got such a cutie!!

What a cutie!! Merry Christmas, hope everyone is doing well!!

You are such an awesome dad!!

Aah, the comments have helped me out - I thought you were talking about the band .....

Happy Christmas to all of you!

My friends and I drove from Philly down to the game on Sunday...lets just say it was a looooonnnngggg drive home :(

But I still love my EAGLES!

Okay, Okay, so the Eagles aren't the best...but the Phillies still are the World Champions!!!!

ok, we lost. i mean we really sucked! But the redskins can only score 10 against us? come on! how many chances do you need.

Dood. That is soooo not cool. We're hurting up here in Philly. That shirt (on that beautiful babe) is a cruel taunt! ACK! IGGLES!

I'm glad you three had fun. I know you needed it. How is Tricia feeling lately? And I would love to know how your sweet baby girl has been. Health updates, Nate! I worry about your girls (and you).

Have a wonderful Christmas.

I know you're asking kindly, but I'm not sure exactly what you want from me...I continually mention Gwyneth and Tricia in my updates.

If I don't share some details (and I do share a lot)), it's either because there are not many details to share or because I choose not to share, and I don't understand why people ask me to share more than I've already given (again, especially since I've traditionally shared so much).

Don't really understand why you have to be somewhat rude to your readers who ask innocent questions...I refrained from commenting during the whole "Chloe debaucle" but you really should consider how your words sound. I say this with caution, but it's almost as if you are not satisfied if commenters aren't just raving over you and your family. You come across as quite pretentious sometimes and that is a shame, because I'm sure that's not what you intended.

(at the risk of sounding rude and pretentious...which, as you pointed out, is not how I mean it) You do realize that this medium of communication lends itself to my tone sounding like anything the reader might want me to sound like? I can write something as sweet and buttery as possible, yet there will always be some who read it as my being rude...I can write something completely serious, and there will be some who think I'm joking.

If I were really to consider how my words sound to everyone who reads them, my only option would be to stop writing altogether, which, BTW, crosses my mind quite often. Trust me when I say that I take great time and energy to consider how my words sound (to the majority)...that's actually one of the biggest reasons I take blogging breaks from time to time...it's a lot of work to try and stay even close to PC, and even when I do, I still get people who don't like what I say.

BTW (since you reference Chloe, who never did answer my questions), I'd love to know exactly what I've written that comes across as "pretentious" and "rude" to you, including anything I wrote to Chloe.

"it's almost as if you are not satisfied if commenters aren't just raving over you and your family" While that's not true, my question to you would be, should I be satisfied when people are critical, when people beg for more more more photos and info, or when people try to tell me what they think I'm doing wrong?

The bottom line is, this conversation wouldn't be taking place if I wasn't blogging about our lives. I'm sorry if you find this rude and pretentious, but I can't be concerned with the few people who find me to be rude and contentious, especially when it's because I've taken the time to answer a question like Laura's in an honest and simple way, especially when the "rude and pretentious" accusations come from people who are basically anonymous strangers (again, that's not meant to be rude...it's simply a fact).

I bet it just kills you that the redskins win kept the COWBOYS playoff hopes alive. That`s ok, it killed me to have to root for the skins.

Why is it that people (Chloe, Kelsey, etc.) won't respond to my comments?

@fuzz...what is that you were saying...something about "playoff hopes" for the cowgirls?

I'd rather see the eagles in the playoffs than the cowgirls...not that either of those teams have a chance to win in the end.