Second, I found it interesting how many long-time readers have never caught all of my references to Lynchburg, VA on my blog...so, I thought I'd share a bit about me and my connection with the City of Seven Hills.

Lynchburg is actually my home town...yes indeed, I was born in Virginia Baptist Hospital 28 years ago, this week. At the time, my father was attending seminary at what is now Liberty University. In fact, my parents met at LU (actually, back then it was Liberty Baptist College), and a great many of my uncles and aunts and sisters and cousins have also attended LU over the years.

We lived in the Burg until I was about 3 (?), and eventually ended up on the OBX a few years later. I have almost always had family in/around Lynchburg...my grandparents and a few of my dad's brothers lived there for several years, and now one of my uncles and his family live in Forest (just outside of the city). So, as I grew up, just about every Christmas and at least a few other times every year, we could be found there hanging out with family. And, since we don't get much real snow here on the OBX, my mom would often take us up there during the winter whenever a big snow was forecast for that area, just so we could have some fun.

Contrary to popular belief, although Tricia and I did both attend LU at the same time, we did not meet there. I was a student at LU for 5 semesters, and Tricia was there for 3 semesters. I asked Tricia to marry me in Lynchburg, and we have lots of friends who are either now working/teaching at LU or living in the area. Because of that, since getting married and moving away, we have traditionally made a trip or two every year to hang out with family and friends.

But, our trip there this week was our first in over two years, so it was especially fun to see some people we haven't seen in a long while.

And, yes we did eat lunch at the Texas Inn (or "the T-Room" as most locals call it)...I usually order two cheesies (a burger topped with a fried egg, cheese and relish...I add mustard and I don't go "all the way") and a bowl (chili), in case you want to know. Gwyneth was not disappointed with her first T-Room experience....the oyster crackers were the best she's ever had... 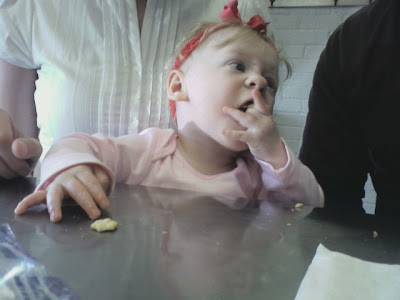 Oyster crackers---yum! We ate at a chili place on Sunday and my boys at the crackers up. Funny, because they aren't as big of a fan of them at home!

Oops...that was supposed to be my boys ate the crackers up!

Glad to hear that y'all had a great trip.

Ok, the "read this" Is that some sort of early April Fool's or a link that isn't "linked"?

I can't believe you are only 28 years old - you are mature beyond your years, my friend. Gwyneth looks adorable as usual.

City of 7 Hills made me think of Kampala, Uganda, where we did ST missions one summer and I would love to go back...so, in case you're interested, there are apparently lots of "cities of 7 hills": http://en.wikipedia.org/wiki/List_of_cities_claimed_to_be_built_on_seven_hills

Here's the connection....I am from Nags Head..you know Chesley Mall in Manteo-that's my families. I moved to Lynchburg 13 years ago. I now live in Forest, and my husband goes to school at LU which is where we also attend church! There is NOTHING like a cheesey western. Did you and Tricia hike up to the gazebo and giant LU sign?

We live in Forest across from London Downs golf course. we have been here three years transplanted from CA. I am glad you made it home safe

cheesy western is only the best food known to mankind.

a thin burger fried on the grill top and marinated in grease. Then placed in a small fry pan and enveloped in a scrambled egg. Topped with cheese and a cabbage/mustard based relish. Slid on a steamed bun sliced in half.

to the anonymous negative commentor: uou are simply jealous of the genetic good looks of the lawrenson family. don't like what you see? change the channel.

Wow, I can't believe you took her to the T-Room! That's hilarious! I bet she thoroughly enjoyed it! Glad you enjoyed Lynchburg, sorry we couldn't see you!

Sometimes I miss the 'burg myself. Ashley still recalls some of the days she and Tricia roomed together. Our first date was at Billy Joe's. It be great to connect with you guys again. Maybe when you are on the way to Durham or home again. Oh, the 'burg. Wake Forest (where we live now) reminds me of Lynchburg a lot.

Funny how lives and paths overlap, even with people we've never met. I was born in the NC mtns, attended high school in Durham, college in Raleigh, honeymooned on the OBX, and after 11 years in South FL, now live in my husband's hometown in Roanoke County!
Lori C. in VA

So I've been stalking your site for quite awhile and praying for you but I never made the L'burg connection! We live in TX now but we are from that area, too. Hubby and I both attended LU in the 80's. (I started when it was still the college and not yet a university.) After we married, we bought our first house in Forest.

And the T-Room? Well, there just isn't another establishment like it. All the way is the only way to go! Ha ha!

Andy has had a western experience

Just wanted you to know my connection...I am Rachel W's mom(you were at her house this week). She asked for prayer for your family about the time Gwyneth was born and I followed your blog and kept you all in my prayers. Nate you are an amazing man of God and he used you mightily in the last year and a half...in my life and many others. Gwyneth and Tricia are so blessed to have you as the man in their lives. Your story is so inspiring and I thank God that you so willingly share it with us. It's wonderful that you are able to be doing"normal" things again. Thanks again for sharing! Gwen

She is so lovely!

It's never too early to start going to the T-Room. (I was born at Virginia Baptist as well.)