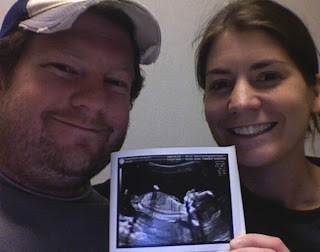 On September 2 during our Sunday evening communion gathering at church, I shared for the first time with our church family (which is basically many of our closest friends) that Tricia was going to be placed on the active transplant list...PT was to begin the very next day. Tricia was not there that night because she was not feeling well. When I got home, she had some very scary and exciting news to tell me...we were (and still are) pregnant. She had literally found out as I was sharing the transplant news at church. While we had been trying to become pregnant for several months last year and early this year, we were no longer trying.

At that point, she was about 5 weeks along. She is now almost 4 months along. She is incredibly high risk...about as high risk as any woman can possibly be. Although we immediately told our doctors and family and closest friends, we have waited this long to tell anyone else because the chances of losing the baby in the first few months are especially high, and the added stress of trying to answer a bunch of questions that we couldn't answer was not something we desired for our lives at that time.

(after we told them that aborting the pregnancy was not an option) Our doctors told us that the best thing for Tricia and the baby would be to begin the PT as planned, which, of course, made it very easy to not have people ask questions. Of course, Tricia was immediately disqualified from transplant candidacy. (our prayer is that she will be healthy enough after the pregnancy to be re-evaluated and placed on the list)

Tricia has been monitored especially closely by her CF and OB docs for the past three months. Of course, this complicates everything to the nth degree. Tricia now has diabetes. Her meds have been changed. She has only gained about 2-3 lbs. She is on oxygen almost 24/7. I could go on and on, but that's not what we're focusing on...

So far, the baby is healthy. Everything has come out normal (and we've had a lot more tests than normal). We learned several weeks ago (see picture above) that we're having a girl. Just this past week, we saw and felt her move for the first time. We are excited beyond words, especially as we consider that it is a miracle that we even conceived, much less that we have made it this far.

The due date, according to the size, etc. of the baby is April 24. A fetus can survive outside of the womb at 24 weeks...anything we get to beyond 24 weeks we'll count as an added blessing.

We're guessing that Tricia will need to permanently (at least through the pregnancy) relocate to Durham sometime within the next several weeks. The docs want her close by to keep close watch and to keep her from traveling as much as we are right now.

So, now our focus has entirely changed from transplant to pregnancy. The risks are much higher, as are the rewards. We are taking every day on at a time, counting each as a blessing. The prayer requests have changed and grown as well. I'm sure you can figure many of them out on your own, so I'll mention them in detail later.

We told our church family tonight, so now we're telling you because the word will spread fast. Thank you all for your continued prayer. We're headed back to Durham tomorrow to resume PT.

Nate
Posted by CFHusband at 9:32 PM

praying, praying, praying! we're telling everyone we know your story that they would join in in lifting up all three lawrensons before God. tricia, you are the bravest, strongest woman i know! nathan, keep holding strong! we're here for you both & are standing with you day by day in prayer!

We will be praying for you, your wife, and that child! I'm pleased to hear that the doctors are taking so much care for this unborn life. This pleases God!

I am so proud of you both... what an incredible journey you have ALREADY had... now add a beautiful HEALTHY (in Jesus' name!) baby girl to that! Woohoo! Praying for you guys!

Your dear friends Patience and Jordan Leino passed the word for us to pray for you. I am even as I type this praying, and will continue to do so, trusting in God's infinite mercy and grace to see the three of you through this. God bless you!
Patty Honeycutt

How EXCITING! God has amazing plans, I know He does! We'll be praying for health, safety, and a smooth pregnancy (as smooth as possible).
Love you guys. Barbie

Wow!!! The news is out and we are all smiles and prayers LOVE YOU THREE :) So glad to hear Patience and Jordan are coming to visit Friends Rock!!

We are friends of Patience and Jordan and walked their journey with them this past year. We will be praying for all three of you as you walk this road. We live about 40 minutes from Duke, so if you have any family or friends that need a place to stay while you are in the hospital we have an extra room and couches... and floors. :-)

Nate, WOW! Awesome news but I terrifying too. I'll pray for your wife, the unburn baby and you! Keep trusting in our God. He is makes everything possible!!
Love, a fellow Freq, Jacoline

Nathan and Tricia...WOW! So awesome!
I am praying and have everyone I know in california praying for you both and the dear little life to come:). I stand with you and PRAISE GOD for this miracle, and stand also in prayer knowing He will be with you in this every step of the way. God is simply amazing and has plans we could never expect.
You two are a testament to me of Gods work and faithfulness...

CONGRATULATIONS, this is exciting! I PRAISE our Lord, the mighty God for this :)
with love,
Emily Haager

We have just arrived home from our 10 days in Disney World and there is no better news to come home to. We are so thrilled for you guys and will continue to pray for you three. Hope to see you all very soon,

I cant believe your story, its amazing and I wish you all the luck, hope, prayers in the world for a safe and happy outcome. I have CF too and am 29. My husband and I had been trying for a baby but due to a decline in health this year, are no longer. I was also assessed for transplant in october but not been listed yet, it's a little too early they say. We wil NEVER EVER give up hope of becoming parents and my sister has agreed to be our surrogate host. You guys are an inspiration. Good Luck. x

Congrats on the news that your wife is pregnant. I lost someone to CF ten years ago. Having never told her that I was in love with her, I am in pain every day. I wonder what would have happened had she lived. Your story gives me a glimpse of what could have been. I wish you all the best.

Congrats to you, your beautiful & healthy wife & to your healthy & perfect bundle of joy.God bless u & your fly.The bible says that God will never let you go through more than you can handle & that God always makes a way.Dont worry about anything, you have loads of people praying for you & you serve the true & miracle working God.