Here are a few things happening locally (in the Durham/Raleigh area) that you might be interested in...

The Pressure Boys will be reuniting for a show at the Cat's Cradle in Carrboro, NC on May 2, and May 3 2008 to benefit the Cystic Fibrosis Foundation! Tickets are on sale now! 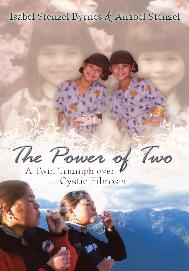 The Stenzel Twins, authors of "The Power of Two" will be appearing at McIntyre's Books (near Chapel Hill, NC) on May 5th as a part of their national book tour. Isa and Ana are inspirational CF/TX twins.

Nate, I hope you have read the book the Power of Two. I know Isa and Ana personally because of a CF retreat I go to in California each summer. They are amazing people. If you have not read the book, I really recommend it. I am not one to read CF books because it makes me sad or gets me depressed about the stuff I am going through. But this book is way more than just about CF. If Tricia likes reading about other people with CF than I am sure this would be uplifting for her especially after her transplant. If you read the book, let me know what you think of it! Cfmags@omcast.net.

I went to CF camp with Isa and Ana in CA! I miss CF camp!

Blessings From Above said...

I wish I was in your area...the Pressure Boys sounds like a good time.

I will have to pick up a copy of "The Power of Two" though.

As always, thanks for sharing!

Sounds like a busy weekend in the area. Wish I was there for the weekend.

I have twin boys and enjoy reading about twins. Since following your blog I have become very interested in CF so, it sounds like the perfect book for me to read.

Thanks for all the great updates today!

Oh Man! I wish we were in the area. That is neat there are so many great ways to support the CFF going on there this weekend.

I will also have to pick up a copy of the book.

Best wishes in the walk. Please keep us all posted on how it goes.

Blessings and continued prayers for your girls!
Amy in Oregon

I too have read their book, very inspirational and real! I haven't met them in person but corresponded with them via e-mail very sweet women. Willing to help and encourage all it seems.

How do you get pictures and everything on the blog like you have?? I just joined and have no clue how you make your page so nice.~April
My blog is 65 Roses and a Baby.

Oh my goodness, Nate and Tricia- I know Isa and Ana Stenzel! When I was about 9 or 10 I attended CF Camp in CA (before camps were banned) and they were my counselors! We became good friends and kept in touch long after camps were shut down...sadly, we've lost touch but I would LOVE to re-unite with them!
Can I find contact information for them online? Hmm, i'm going to look around...amazing how the CF world is so small :).

wow. thanks for the book reccomendation. I don't have CF or twins but am fascinated w/ both sunjects and about learning more about CF in general.and these girls story looks amazing! what strength one with CF must have!

btw I read the one twin just had a second double lung transplant. is that common? also I know this is morbid but what is the life expectancy with the tx? has anyone ever had more than 2 tx?