Finally, I got my answer.

We went to the beach together that day after church. I was basically to the point that I was about to burst. Here we were, spending lots of time together, getting to know each other really well, having great fun with each other, but I had no idea where our relationship was heading.

As Tricia and I walked up the dune toward the ocean, I brought up our conversation from a few weeks before, and asked (it probably sounded more like begging) if she had made a decision.

She said she had. She reached for my hand, looked into my eyes (yeah, this is my romantic version) and told me that, as long as I never called her "Pattysue" she thought she would give me chance.

Of course, my heart was racing and I doubt my face could have hidden my happiness if my life depended on it. Of course, I immediately promised to never call her Pattysue again. And, of course, it only took me a few hours to break that promise.

Although I never kept my part of the deal, Tricia did.

That was seven years ago today (May 27), perhaps even this very minute. The best seven years of Tricia's life!

Below is our first picture together later that same week. 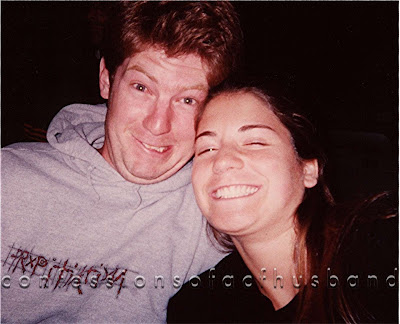 Posted by CFHusband at 2:05 PM

Labels: The Story Of Us, Tricia

...And lived happily ever after...

What an awesome way to find a best friend.

What was she thinking?

How amazing how both of your lives have changed! I love the new header pic of you three!

Ain't love grand? You guys are so very loverly.....Congrats. By the way I'm really loving the new blog header!

I'm so happy to see another addition to the story! This is part of what drew me in to your blog in the first place!! Thanks for sharing your story with all of us crazy strangers.

What a BEAUTIFUL story, I love hearing about it! you guys are awesome!!

You know we're all suckers for the continuations of this story...

When do we get to hear Tricia's version?!? ;-) You guys were made for each other!!

and your picture facial expressions haven't changed in all those years

I truly believe that the funnest thing ever is to drive your spouse crazy (in a good way!)

I do it to my husband all the time, he's lucky like that.

I'm so glad you've had such an amazing 7 years together!!

LOL, I love it! You both look like a lot of fun.

I just love "The Story of US" post.
I love how Tricia puts a whole nother spin on it too.
Thanks for sharing this.

Oh I love it! Thank you for sharing your story!

Aww. You guys are too cute! Your story is one of the best love stories. Thank you for sharing!

I love reading your story! Thanks so much for sharing with us! : )

How sweet Nate! This day hold special meaning for me too as it is my 7th wedding anniversary. May 27th, 2001 was a big day for both of us. :)

Hooray! I got so excited when I checked and read "Story of Us"-so, you caught me, I'm a procrastinator (or however you spell it)I've loved all of the posts-necklace, family pics, etc.
I always feel so happy when I check in on you guys.
Glad things are going great!
Kim

How romantical!!!! Today is Chris and my (is that the proper grammar?!!)8th wedding anniversary; it's a special day for you two and for us!! May 27th is a great day, indeed!

Blessings From Above said...

I have been waiting for this!!! So glad you have continued your story, and what an appropriate day to do so.

P.S. Many guys can't remember their wedding anniversary, but you remember the exact day your relationship changed. Very cool!

Thank you for posting this! :) I don't think the children care much, but I've been waiting :)
I love how you posted it today on the very day it all happened! The Lord made you for each other.
love and prayers,
The Lockwoods

Ohhh I am so happy. I love reading The Story of Us!! Thank you so much for another installment.

I have a quick question. How is Gwyneth sleeping at night? Is she keeping you up much?

Yay for May 27th!
This is also our wedding anniversary, 13 years!

Tricia, you are a lucky girl. I can see from the blogging what a great character your husband has. Nate, you already know you're lucky! :) It really is a treat to see such a romance in these modern times, thanks for sharing.

My favorite episode yet. Wonderful.

OK I can see I am going to be here the rest of the night reading this entire story in one sitting. I am entranced, in awe, in love with your story from the first time I started reading your blog. If you showed up at my door tomorrow I could invite you all in like your old friends I have known forever, and I think that is cool. I cant go a day without checking in to make sure everyone is okay and see whatever new photos you have added

I know I keep saying this... but you guys definitely need to turn your story into a movie.
And I just noticed you changed the pic on your header- super cute!

awww..that is sooooo gorgeous! love the pic also, & the look on your face Nate!..its priceless! :P

Awww! I've been waiting for this too!! I love hearing stories about how people met. It's one of my favorite questions to ask. Now, I can't wait to read Tricia's version.....

Yayyyy more of your story! I am so excited to continue reading.

Thank you for sharing...

you guys both have to continue with the stories soon...they are great!!

What a sweet love story. I think it's so wonderful that you (and Tricia) have written it down. It will be a precious thing for Miss Gwyneth to read years from now.

How beautiful!! What a great love to find.

BTW - that day was a great blessing for us both. My first was born that same day. ;)

So, you've always been making funny faces! :-) I'll bet you're a riot to hang out with!

I learned about your blog through Lisa Leonard designs... You have a beautiful family, heart, soul... Your love story has been so touching-i have a lump in my throat--(glad that i could read it all at once LOL). YOUR WHOLE STORY has been so inspirational. I have added you to my blog roll-i hope that you don't mind. I want to encourage my friends and family to check out your site. my thoughts and prayers are with you and your lovely ladies on a daily basis!! thanks for sharing your story with the world!

AWWWWWWWWWW I LUV IT ALL! SO SO CUTE!